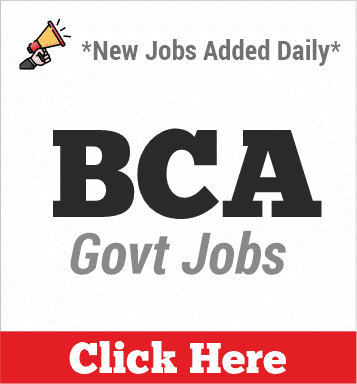 At present there are following Govt jobs opening for BCA passed.

Check Latest Govt Jobs Opening in All Over India Here

Finding a government job has become a difficult task. One will have to undergo intense training to clear the written exam and then face the interview. In this article, we will provide the latest Government Jobs/Sarkari Naukri Opening for BCA, Bachelor in Computer Application. You can find here various Government sector jobs. Most of people say that there are no Government vacancies for BCA graduates. But it is not true there are lots of Sarkari Naukri jobs openings in various public sector companies for BCA passed candidates.

Government Sector jobs are increasingly gaining popularity as they offer high security to their employment. Unlike private companies, an individual can work till the age of 58 years without being worried that they will be sacked out of their service due to poor economy and market. Hence, there is an increase in competition from different sectors of education to gain the right employment. IT or information technology is seeing a greater increase in students every year. It is necessary to find the right job with a good pay package that fulfils the basic needs.

BCA or Bachelor of Computer Applications is an undergraduate course and degree awarded on completion of the three-year course to a student in India. A student will have to cover a wide range of subjects such as mathematic, data management systems, programming in C, statistics, probability, scientific computing, operating systems, computer architecture and programming, programming in visual basic, internet and web technology, computer algorithms, distributed computing, accounting and finance management. A student shall submit a project work as part of the course in the final semester. There are six semesters spread across three years for which a student has to complete to be awarded the degree.

Opportunities though are available for BCA professionals, are hard to earn. Due to low availability of employment and tough competition, it has become very difficult for a BCA fresher to be employed right after their completion of the course. Speaking about employment in the government sector, one can be placed as Bank Clerk, Probationary officer, Short service commission for Army and Navy, IAS, IPS, CBI, Groups examinations, RRB and UPSC. Every field has its own requirement and criteria and the student will be placed based on their talent and the ability to perform a task with care. The employment is awarded after a student has cleared of the written examination and cleared the HR interview round. He will then be placed on probation in the starting before inducting on a permanent basis. The job profile is good for BCA candidates in Government Jobs.

PayScale varies from one job profile to another, and it is hard to compare. Also, the total amount earned also varies according to the place of the job posting. An employee posted in a metropolitan city will earn more than the one who is posted in towns and smaller cities. The reason behind this, the changing cost of living. Though not much information is available currently, on average, a BCA graduate earns anywhere between Rs 183, 126 – Rs 828, 744. The maximum amount is undisclosed and depends on the job profile, seniority and position. So you can say it is a good salary package in Sarkari Naukri Government jobs for BCA or for graduates.

A BCA graduate can look forward to joining a government job in different areas. They will have to understand their own capability to seek employment in the right area.  There are good openings for BCA graduates in the government sector. A student should be keen on performing all the necessary procedures to be eligible for a job. Notifications are usually issued by the government for job openings in various sectors. You will have to apply carefully and be prepared to get through the entire procedure to be placed in any one of the sectors.

A career prospect for a BCA professional in Government sectors is dull when compared with other degrees. This is due to the reason that there has been a tremendous increase in the competition and the market is seeking professionals with expertise in a particular field. Not to be disappointed, a BCA professional can still seek a government job in the postings that are mentioned above in the article. All they have to do is prepare well for the written exams and interview to be placed under a government pay scale. Notifications for the same are released from time to time by the government according to the availability of posts. One should always keep an eye on the eligibility criteria to apply for a post. Government jobs offer the best job security and good pay package irrespective of the economical situation and the growth of the market. You can also find the latest Govt. jobs for master degree in computer application MCA. As you can find the opening jobs positions in the Government Sector for BCA degree holders.